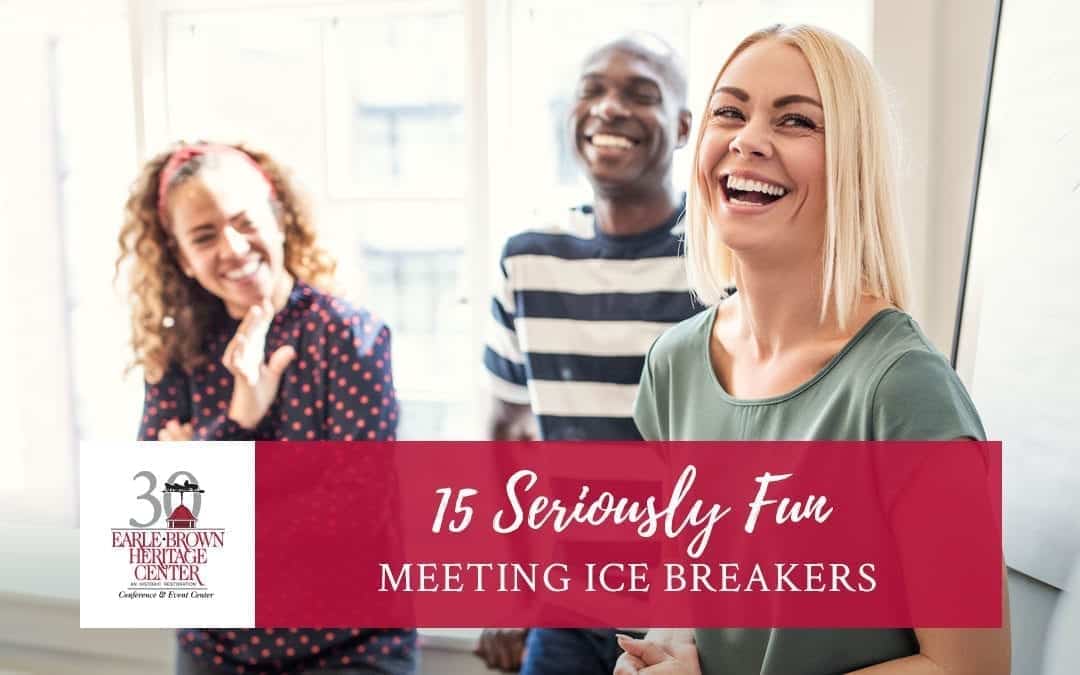 Time to thaw out those expectations and warm things up with some fun! Team icebreakers can make or, yes, break the crucial first hours of your meeting, conference, workshop or other corporate event. Regardless of whether your event is virtual, in-person or a hybrid mix of the two, the right ice breakers for work can foster ease and goodwill among participants that will last throughout the event.

You won’t find any lame “fun fact” introductions or uncomfortable, forced interactions here: These ice breaker ideas are fresh and varied, so you can find the unique option that works for your event and your guests! Below you’ll find a list of some of our favorite ice breakers for meetings, including:

Remember that, while ice breakers are a great tool for a broad spectrum of events, some meetings or workshops may not be the appropriate time or place for more “fun” activities, like meeting under a high-pressure situation or to discuss more serious topics. Use your best judgment! 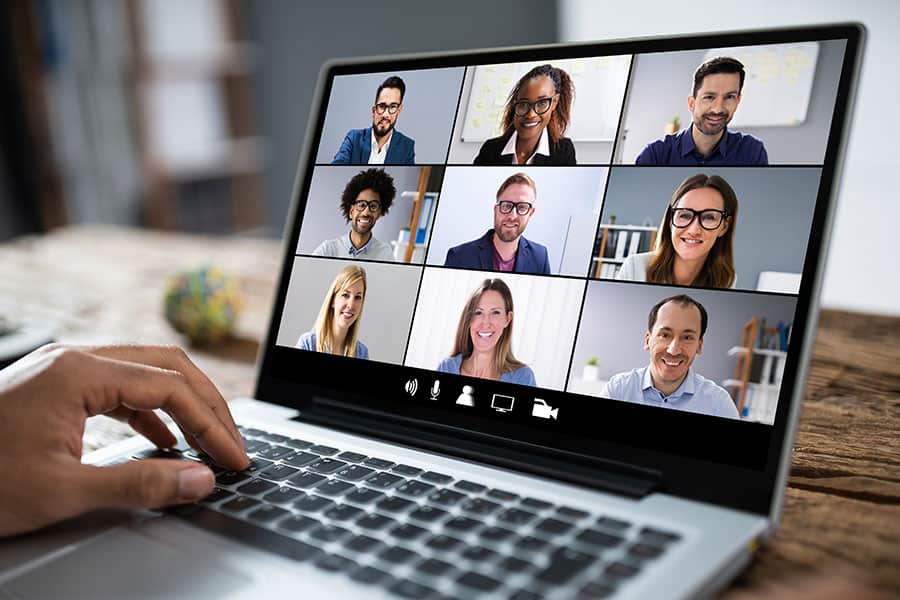 Remote meetings can be awkward, to say the least. Webcam troubles, sound issues, WiFi problems and general unfamiliarity can make virtual events a little stilted. Ice breakers for remote teams can be equally as stiff, but you won’t find any of those in this guide to fun, easy virtual icebreaker ideas! These virtual icebreakers are perfect for video conferences thanks to their simplicity—no additional tech required.

Ask participants to give the group a tour of their workspace. Encourage them to point out the fun, silly or interesting details of whatever room or space they’re working in, from kids’ art on the fridge to a pet hanging out beneath their desk. This ice breaker for remote meetings helps to loosen up everyone on the call by reminding everyone that their coworkers are regular people, just like them!

In this icebreaker, each participant takes a turn to share three things about themselves: Two things that are true, and one that is a lie. The rest of the team then must guess which of the three facts is the lie! For this to work optimally, remind players to make their lies as believable as possible, as outlandish claims stick out like a sore thumb.

As far as ice breakers for virtual meetings go, this one couldn’t be any easier: At the top of the session, simply ask each participant to share in the chat function an image that represents their current mood. If your video conferencing platform supports sharing GIFs, you may go that route, or opt for emojis. Remind participants to keep their GIFs work-appropriate!

What’s the easiest way to get to know someone? Ask them about themselves! Ice breaker questions are a fun, genuinely interesting way to learn more about your teammates or meeting guests and foster a sense of community for the duration of your event and beyond! Keeping your work meeting ice breakers lighthearted, positive and PG (that is, work-appropriate,) is the best method to achieve a great outcome.

Amusing questions work well as icebreakers in a variety of settings, including as video conference ice breakers, in-person team meeting ice breakers, and more. For these icebreakers to work best, keep the pace upbeat and snappy, so everyone has a chance to share. You might consider breaking off into smaller groups to encourage conversation and memorable connections.

Some quick, easy and funny icebreaker questions for work include:

“Would You Rather . . . ?” is a classic icebreaker game used by folks young and old everywhere from playgrounds to boardrooms! In these fun team icebreakers, participants are asked to identify which of two presented activities, actions or circumstances they would rather experience—hypothetically, of course. As with all workplace icebreakers, keep your Would You Rather questions work-friendly and avoid any topics or scenarios that might make others uncomfortable. Consider some of these starter questions:

Like “Would You Rather . . .?”, “If You Could . . .” questions are simple, fun icebreakers that encourage participants to start thinking creatively and learn about one another. Again, participants are asked a question that requires them to weigh options, consider new possibilities, and support an argument—all of which make these types of questions perfect corporate ice breakers! Consider these examples as a starting point: 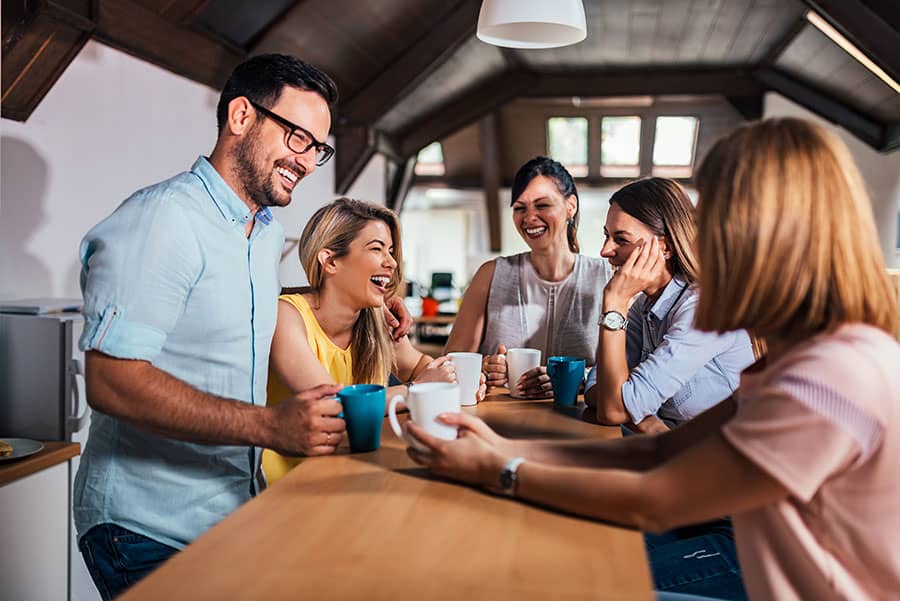 Icebreaker games run the gamut, from head-scratching critical thinking games to silly, on-the-spot improv and beyond. Small groups are ideal for getting folks up on their feet, which helps encourage participation and connecting with their fellow attendees.

If you’ve seen “The Office,” you’ve seen a game of “Who Am I?”—albeit a less successful one! In this game, everyone has a name tag attached to their back bearing the name of a famous person. Each participant must try to figure out which famous person they are only through “Yes” or “No” questions to their fellow players. For example, you could ask “Am I an athlete?” but not “What’s my profession?” This one is great for groups of 50 or less.

An oldie but a good, “What’s In Your Purse?” is a scavenger hunt for grown-ups. At the start of the game, players are given a list of items. When time begins, players must race to produce those items from the contents of their purses, backpacks, etc. You can even adapt this game for the modern era by making it “What’s On Your Phone?” and including list items like “A photo of your pet” or “A word game app.”

9. Whose Story is This, Anyway?

Icebreaker games for work get a bad reputation as being boring, but this one is anything but! Provide participants with paper and pens. Have each person anonymously write down the wildest, funniest story they have based on a given prompt. (Think along the lines of “Tell us about your worst vacation,” or “Describe the worst haircut you’ve ever had.”) Once completed, the stories go into a hat, and are chosen at random for the group to decide: Whose Story is This, Anyway?

Standing in a circle or row, have the first person name a category, then quickly name three things that fall under that category. For example, if the category is “Fruits,” you might name “Apples, bananas, oranges.” The next person then must name three more items in that category without repeating previously stated items. The first person to repeat an item, or hesitate to the point of being unable to name three items, is “out,” but gets to name the next category. The game then picks up with the person after the one who was “out.” Keep it quick, and don’t overthink it!

Big groups can be tricky when it comes to conference ice breakers—there’s just so many people to engage! Thankfully, there are many ice breaker games for large groups that rise to the challenge. These games make big groups easier to manage by breaking them into smaller groups, and encourage sharing while limiting the opportunity for focusless chatter.

This icebreaker is great for amping up the energy of an event. As a group, decide on physical poses that will represent each element in the game, like the fetal position for “Rock” or going stiff as a board for “Paper.” If someone is leading the meeting, they may consider preparing these poses beforehand to eliminate crosstalk.

After poses have been decided, break participants into two teams. For each round, each team will do one pose, with every team member holding the same pose. Give the teams a few minutes to strategize. Then, the meeting leader will instruct the two teams to face each other and count down from three. On “Shoot!”, each team must strike one of the three poses and hold it—without laughing! The rules are the same as traditional Rock, Paper, Scissors, but if a team starts to giggle, they automatically forfeit that round to the other team! Best out of 5 rounds is a good number for a larger group.

12. Lost On a Desert Island

Meeting ice breakers are going tropical, but all is not well in paradise! The premise is this: Everyone at your event has been stranded on a deserted island, but are allowed to salvage one item from the “shipwreck,” ideally something that means something to them or that they would enjoy having under these dire circumstances. The first part of this game is simple: Each participant describes what their chosen item is and why.

Next, break participants into smaller groups. Ask the groups to work together to increase their chances of “survival” by combining their items in some fashion. Participants will have to get creative to use every item to create something useful! If necessary, participants can use elements “found on the island” to supplement their designs. When time has ended, each group can share their creation with the whole and explain how it would aide in surviving their island adventure! 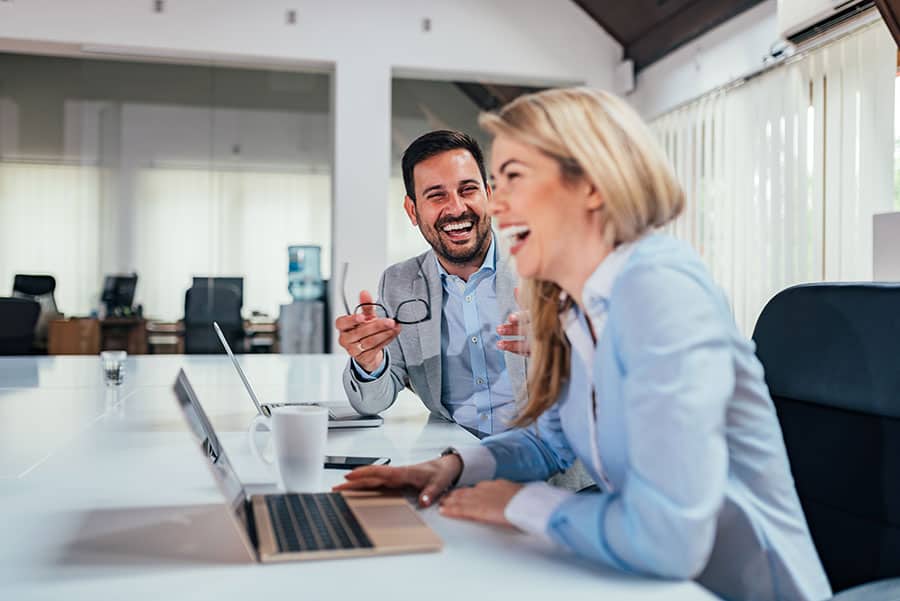 Sometimes, you simply have to get the show on the road. That’s where quick icebreakers come in! Icebreakers don’t always have to be time-consuming games or conversation starters; they can be as simple as an easy joke or anecdote. Consider some of these brief icebreakers for your next meeting:

Okay, yes, we promised you up top that there’d be no cheesy one-liners in this guide: But these jokes are cheesy on purpose! If you can get your group laughing with you, not at you, you’re well on your way to a cohesive, enjoyable meeting. For these ice breaker jokes to work the way you intend, make sure it’s clear through your tone and body language that you know these jokes are bad—that’s what makes them so good!

If you’re leading a meeting or event, an easy way to make your participants feel more comfortable and at-ease sharing with you is to share about yourself first. Tell a quick story or anecdote about something relatable and, if possible, pertinent to the topic or focus of your meeting.

Some examples that tend to go over well are:

Host Your Next Meeting At Earle Brown Heritage Center

Breaking the ice can be intimidating, but planning your next corporate event shouldn’t be. At Earle Brown Heritage Center, we’re experts in planning and executing business events of all varieties and sizes. With distinctive, welcoming rooms and all the amenities you’ll need to make your event a success, Earle Brown Heritage Center is the perfect place to gather your team. Contact us today to start planning your truly extraordinary event!