30 Years of Weddings: What’s Changed — And What’s Still On Trend 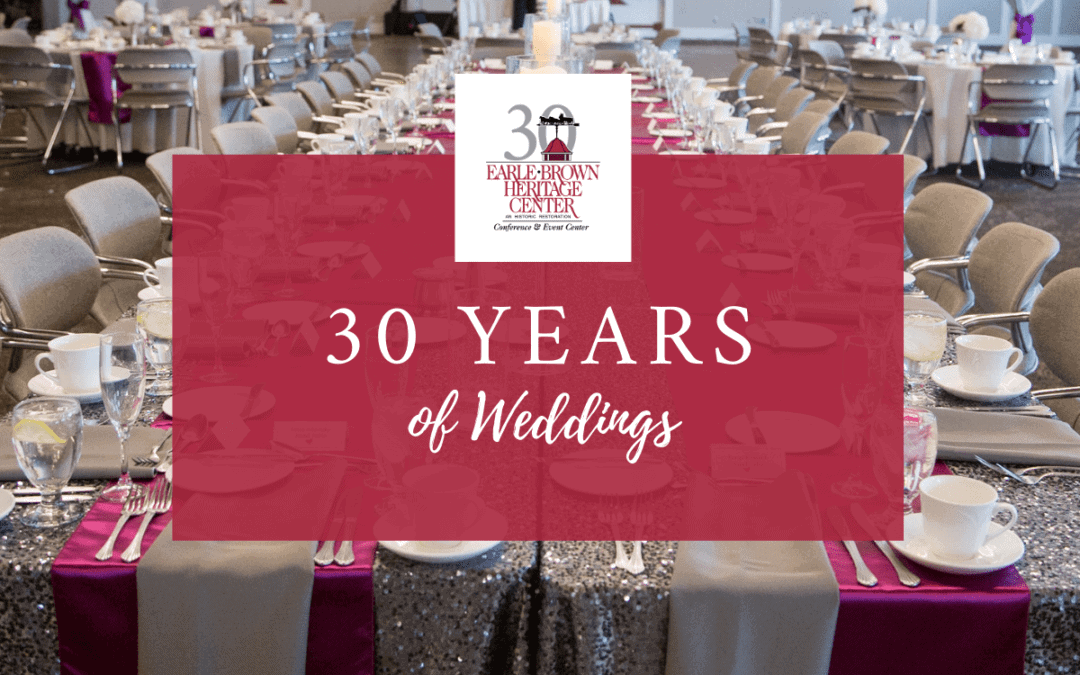 In honor of Earle Brown’s 30th anniversary as an event center, we’ve been looking back on the last 30 years in the wedding industry. While there’s some trends we’re not sad to see go (‘90s liquid metallic bridesmaid gowns, the great Choreographed Group Dance boom of 2009) others have rightfully earned their spot in wedding trend history.

Take a walk down memory lane with us as we look back on the wedding trends of the 1990’s to today, and offer our tips on how to incorporate the best parts of the last 30 years into your modern wedding day:

In the ‘90s, couples finally began to shed the idea that elopements were scandalous (or for those on their third or fourth marriage) and began to venture out into the world for their big day. Intimate and chic elopements became en vogue, as did exotic destination weddings. Cakes with fresh flowers were the dessert of choice, and floral arrangements shrunk in size across the board. An ancestor to the now-ubiquitous reception photo booth, couples placed disposable cameras at each table for guests to snap photos with throughout the night. (Though this really took off in 2001 after Friends aired “The One With Monica and Chandler’s Wedding.”)

The turn of the century saw couples continue to turn away from traditional church weddings, so venues like country clubs and hotel ballrooms boomed. Destination weddings at swanky resorts continued to be popular, particularly for couples who desired a super-intimate affair with only their nearest and dearest without sacrificing luxury. As couples explored these far-flung destinations, their fascination with the exotic was reflected in their wedding decor; blossoms like hibiscus and bird of paradise were popular in floral arrangements and bright colors splashed onto palettes. By 2008, the aforementioned photo booths and backdrops had taken hold, perhaps telegraphing the focus on personalization that would define the 2010’s.

When Pinterest launched in January 2010, it revolutionized the way couples planned and designed their wedding day. Now brides and event planners could browse thousands of ideas, inspiration photos and how-to posts. So it’s fitting that everything about weddings from 2010 to today has revolved around highly-personalized, unique-to-the-couple weddings! But that’s not to say there weren’t a few trends with a capital ‘T’: “Shabby chic” or “rustic chic” venues and decor, from barns to farms to your own backyard, were the trend of the era. If it had burlap, Mason jars, or chalkboard art, brides wanted it for their own big day! Outside of these ubiquitous themes, couples went all-in on personalization, opting for themes that spoke to their shared interests, mix-and-match bridal party fashion, plus Internet-era conveniences like wedding hashtags and wedding websites.

Incorporate the best of the last 30 years’ venue and design trends by: Staying true to you! Ultimately, the last 30 years have been all about breaking the former “rules” and boundaries of traditional weddings, and doing it in your own way. While we love the neon hues of the ‘90s (Neon signs are so in!) and, naturally, a good old fashioned red barn, the most important thing is that the overall feel of your wedding reflects you and your partner in an authentic, joyful way.

Perhaps nowhere are changing fashions more evident over time than in wedding gown trends! As we moved out of the gigantic puffed sleeves and ruffles of the 1980’s (influenced largely by Princess Diana’s 1981 wedding,) the 1990’s ushered in an era of sleek, modern, lingerie-inspired gowns. Slinky silk sheaths took the place of highly embellished ball gowns, and even veils got the minimalist treatment, as brides eliminated blushers and opted instead for a simple length of tulle attached to a subtle headband. Of course, not everyone was into the pared-down trends of the time: Let us all have a respectful moment of silence for Celine Dion’s iconic 1994 wedding look, complete with her over-the-top bejeweled headdress-slash-veil.

For the first time, a true wedding industry emerged, thanks largely to the release of hit romantic comedies like Father of the Bride (1991), Four Weddings and a Funeral (1994), and My Best Friend’s Wedding (1997). While this drove the price of a wedding up, it also created a boom of wedding trends and inspiration headed into the new millennium. 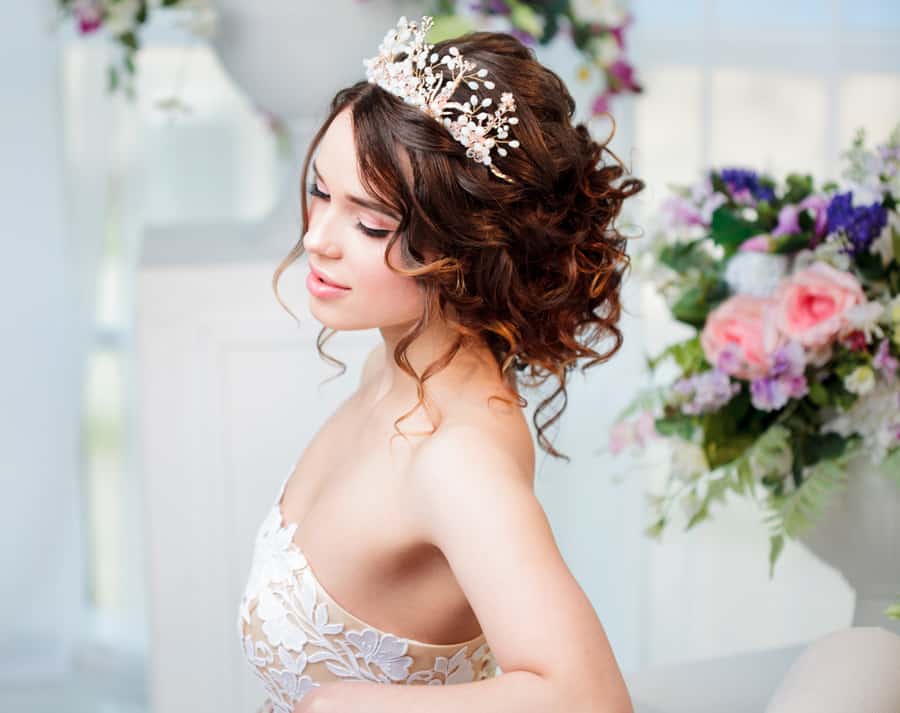 The early 2000’s are not remembered for being a hotbed of fashion (remember denim skirts over leggings?) but the wedding world did benefit from the burgeoning bridal industry. Brides were told they should feel like a princess on their big day—so tiaras and fascinators became the hair accessory of choice rather than veils. Satin, taffeta, and rhinestones were the hottest fabrics and details. As venue trends moved away from churches, strapless gowns shot up in popularity while the popularity of straps diminished. A straight-across neckline was the popular choice for early 2000’s brides, but by 2010 the sweetheart neckline burst onto the scene in a big way.

The 2010’s were all about lace, playing into the rustic chic theme that exploded around that time. Lace was particularly popular for A-line and trumpet silhouettes. Brides started to play with color, like pinks, blues and even blacks, for the first time since Queen Victoria’s day. See-through designs also started to emerge, likely thanks to the sensational success of TLC’s Say Yes to the Dress, which often featured dresses by designer Pnina Tornai, known for her revealing, hyper-sexy, couture-inspired gowns. The 2010’s also saw not one but two major royal weddings—Prince William and Duchess Kate, and Prince Harry and Duchess Meghan, respectively—which drove wedding fashion toward lace and sleeves (Kate) and striking minimalism (Meghan).

Incorporate the best of the last 30 years’ wedding gown trends by: Keeping it simple. Opt for minimalist silhouettes with little to no embellishment, and maintain that light touch throughout your hair, makeup and accessory choices. Feeling bold? Explore some color! And don’t be afraid to show a little skin—trendy two-piece wedding dresses or subtly sexy bare shoulders, anyone?

In the 2000’s, the question “What are your colors?” extended all the way to the wedding cake. Multi-tiered cakes were wrapped in smooth fondant in the palette of the wedding to give a “matchy-matchy” aesthetic to the whole affair. Chocolate cake was increasing in popularity while yellow cake’s popularity waned. Oh, and thanks to Carrie Bradshaw’s fascination with Magnolia Bakery’s cupcakes, there was scarcely a wedding from 2000 to 2010 that didn’t feature a tiered cupcake display or cupcake table, or the even more bite-sized phenomenon of cake pops. In the savory world, it was all about the three S’s: sushi, sliders and sriracha!

Personalization went all the way to the kitchen in 2010, especially thanks to the advent of Pinterest. Build-your-own taco, hot dog and baked potato bars graced receptions. Doughnut walls and literal candy bars sweetened up the after-dinner hour. Signature cocktails were a must-pour at the bar, giving couples another way to personalize their big day. By the 2010’s, wedding cakes had stripped down. “Naked cakes” with no outer frosting were the sweetest cake trend, going hand-in-hand with the rustic chic craze of the time. For couples who did want a little extra frosting, pastels were the hue of choice, especially when painted onto the cake in a watercolor style. Sometimes, wedding “cakes” weren’t even cakes at all, but rather stacks of waffles, pancakes, cinnamon buns, doughnuts, sushi and even wheels of cheese!

Incorporate the best of the last 30 years’ wedding food & drink trends by: Leaning into nostalgia. Try a 2010’s-inspired candy bar, but laden with your favorite ‘90s treats, like Pop Rocks, Dunkaroos, Fun Dip, Cosmic Brownies, Ring Pops and more! Naked cakes and not-cake-at-all cakes have remained on-trend, as have signature cocktails, so feel free to let your personality shine through these delicious details.